“What Is Inverted Nipples Surgery?”

It is congenital and may recur even after surgery.

The method to correct inverted nipple is to cut the fibrous band and support a stout structure beneath the nipple. The inverted nipple is drawn outward through an incision around the areola and suture in various ways to prevent recurrence.

An inverted nipple is not protruded compared to the surrounding tissues and is flat and dented, whereas ideal nipple points outward in appropriate size and height in Ω shape.

The causes are classified mainly as congenital and acquired, and in most cases, it is congenital and bilateral. When acquired, it can occur by wound, an aftereffect of breast cancer or complications after macromastia surgery.

The objective of the surgery is to restore normality in function, shape, sensing and more. However, based on the level of severity, it may be difficult to meet all the goals. As for the correction, the short lactiferous duct should be lengthened and the fibrous tissue (which restricts the protrusion of the nipple) should be cut. Moreover, the insufficient tissue beneath the nipple should be supplemented.

Among various areola reduction methods, the most appropriate method should be opted to minimize scar and effectively reduce the areola.

The basic principle is to incise a part of nipple skin in the center and suture it. In the case of a large nipple, the upper part of the nipple is excised, and the rest remains in an appropriate size and then sutured. Regardless of the method, scars are inconspicuous and a satisfactory result can be obtained. 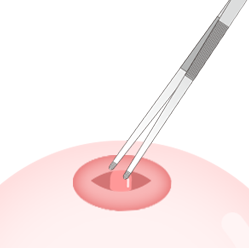 Step 01Incise both sides of nipples 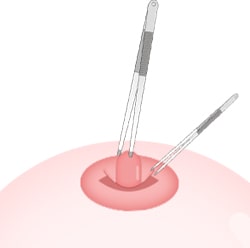 Step 02While preserving the nipples, remove the hardened fibrous tissues that pull the nipples downwards. 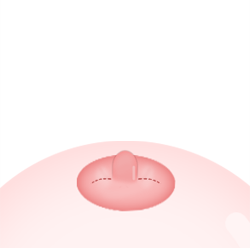 Step 03Place the nipples in the center and suture the surrounding tissues.

Step 01Make an incision around the inverted nipples. 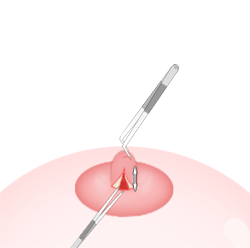 Step 02Make an incision in the lactiferous duct and pull out the nipples hidden inside. 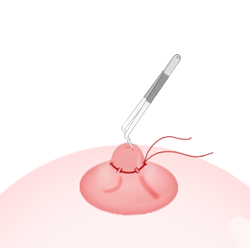 Step 03Make a purse-string suture around the nipples. 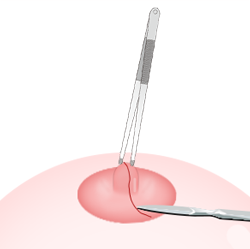 Step 01Make an incision in the center of the nipples and find the inverted fibrous and muscular tissues. 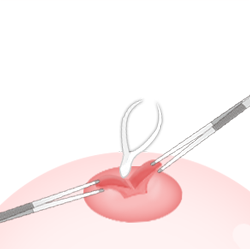 Step 02Remove the hardened fibrous and muscular tissues that pull the nipples inverted. 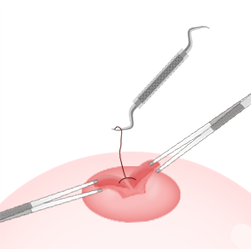 Nipple hypertrophy is more common in Asians than in Caucasians. It not only looks aesthetically unpleasant but also causes problems in breastfeeding.

The symptom occurs generally during pregnancy, childbirth, and lactation, but may also occur in young women who have unusually big nipples, requiring a surgery.

For Korean women, the average nipple size is less than 1 cm in diameter and 7-9 mm in height. The size is not important but should be in relative size to the shape and size of the breast, forming a balance. An excessively big nipple breaks the harmonious balance of the overall breast shape and may appear saggy. Therefore, in such case, areola reduction is necessary to reshape the nipple in an appropriate size.

People who innately have inverted nipples

People who get frequent infection around nipples due to inverted nipples

People who want to have effects of losing weight

People who have breastfeeding problem after the pregnancy

People who are aesthetically stressed due to inverted nipples

The surgery method depends on the patient’s nipples condition and severity.

Precisely suture to create the ideal shape of nipples.

The surgery meets both aesthetic and functional achievements.

If you would like to receive VIP doctor's comments regarding your interested treatment or surgeries, feel free to contact us via mobile messenger app. Please let us know your interested areas with clear photos (front and side) for a free online consultation. Your photos will be privately used for consultation purposes only.

Please note: before and after photos may vary depending on each patient's case.

This website provides the plastic surgery based on the theoretical knowledge and our wide experiences. No contents contained herein may be used as substitutes for direct consultation. © 2016 VIP International Plastic Surgery Center. All Rights Reserved