“What Is Gynecomastia (Enlarged Breasts in Men)?”

In adolescence, men can develop breasts due to obesity or excessive development of the mammary tissue. Symptoms may be seen during adolescence or later in life. Though this is a common problem among many men, it may cause a personality disorder at the most sensitive age, bringing devastating social life problems. The data from overseas indicate that approximately 1 per 10,000 males suffers from gynecomastia. Regardless of gender, both men and women have breasts from birth. As for women, breasts, such as the mammary gland and lactiferous duct, develop by estrogen during teen years. As for men, it is possible to develop breasts just like women due to hormonal changes. Since gynecomastia appears usually as one of the endocrine diseases, it is important to verify the anomaly in the endocrine system.

When Is the Best Time to Receive the Gynecomastia Surgery (Male Breasts Reduction)?

Breasts can grow with pain due to the rapid hormone changes during adolescence. The symptom of gynecomastia may be temporary and be gone generally before 21 years of age when adolescence is over and the hormone level balances. Therefore, this surgery is recommended for adult patients after their adolescence. However, gynecomastia unrelated to endocrine disease or rapid hormone changes will need to consult with a surgeon for a surgical treatment. 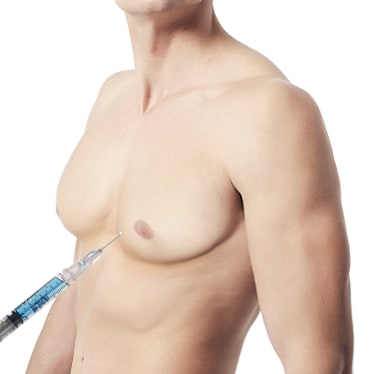 This method is utilized for a male who have a large amount of adipose (fat) tissues in the breasts. The advantage of liposuction method is that it does not leave much scarring due to small incision line. 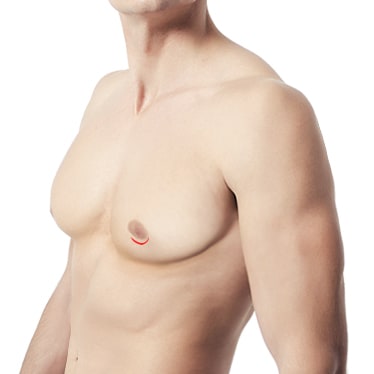 Men who abnormally have a large size of breasts.

Men who are stressed and concerned due to breasts size

Men who relatively have bigger subareolar area than others.

Men who are looking forward to losing weight along with breast size.

Gynecomastia surgery does not require hospitalization.

Gynecomastia surgery does not insert stitches and does not need post-dressing after the surgery.

The shower is possible immediately after the surgery.

The surgery is usually operated under IV sedation and takes about 1 hour.

If there are a lot of mammary tissues removed, there may be some bleeding for 1-2 days. Therefore, a compression dressing may be required to prevent further bleeding.

Although you may go back to daily life, we recommend the patients to avoid holding heavy weights for two weeks.

The doctors recommend the patients avoid intense activities or exercise for a month after the surgery.

If you would like to receive VIP doctor's comments regarding your interested treatment or surgeries, feel free to contact us via mobile messenger app. Please let us know your interested areas with clear photos (front and side) for a free online consultation. Your photos will be privately used for consultation purposes only.

Please note: before and after photos may vary depending on each patient's case.

This website provides the plastic surgery based on the theoretical knowledge and our wide experiences. No contents contained herein may be used as substitutes for direct consultation. © 2016 VIP International Plastic Surgery Center. All Rights Reserved